In recent years netwrap has proven the preferred method of baling when using round balers. It offers many advantages over baler twine which lessen the impact of higher purchase costs over the earlier method.

Every roll of  Tama Round Bale Netting offers all the required essentials for successful and trouble-free baling.

Every roll of Tama Round Bale Netting guarantees all the required essentials for successful and trouble-free baling.

What is the true cost of Netwrap?

How much are you losing… and what is it costing you?

Many Contractors will spend more on Netwrap, over the lifetime of the baler, than on the actual cost of the baler itself.
Why, then, do so few take the time to check?
What is the true cost of a roll of netwrap?

Shorter length rolls or netwrap that is not strong enough can add an extra, un-planned cost to your business. If your chosen roll of netwrap does not deliver the expected number of bales, then more rolls will be needed to compete the baling. Likewise, if you need to add an extra half wrap of net to a bale to hold the crop securely, the additional net per bale will reduce the total number of bales possible from every roll.
All of this adds extra cost to your baling business

BENCHMARK TEST
Over the past 3 years, rolls of netwrap of all lengths and types, from most major manufacturers, were analysed in an accurate benchmarking investigation program. The testing procedure was carried out on a purpose – built testing device, manufactured in accordance with the certified testing design of DLG Test Centre.
The Benchmarking tests were conducted to discover the actual length and strength of many of the popular types of netwrap sold in the market today.

Roll Length
The results showed that more than 60% of ALL rolls tested were LESS than the stated length.

Rolls tested that were LESS than stated length

This means that the price of a roll of netwrap with LESS than the stated length, will COST YOUR BUSINESS MORE.
Shorter length netwrap rolls mean the need to BUY MORE ROLLS.
As the ‘average’ 1.2m x 1.2m silage bale uses approximately 10-12m of net per bale, the result of SHORT LENGTH rolls could mean up to 25 FEWER bales per roll.

Netwrap Strength
The technology of round balers continues to increase, and the denser and much heavier bales put greater pressure on the netwrap used. Benchmarking tests carried out over the past 3-season period clearly showed that many nets nowadays are not strong enough for modern baling techniques.

% of rolls tested that were WEAKER than Tama Premium netwrap

The WEAKER netwrap will require more wraps of net per bale, so
considerably reducing the number of bales possible from each roll.

If you are buying SHORTER LENGTH and WEAKER netwrap…
how much is ‘cheap price’ netwrap really worth ?

When using Round Bale Netwrap, a few moments, must be taken to ensure correct preparation of your machine in order to achieve the best results. The most common problems of net splitting, tearing or fouling on feed rollers arise from the net ‘laddering’, where threads become broken, leading to a running stitch in the net running opposite to the direction of the net, eventually causing the net to separate where the ‘ladder’ has occurred. This can be caused by many different and varying circumstances but will always have the same ‘ladder’ effect.

This is especially important when starting baling after winter storage.

Excessive net friction or an un – even surface will cause the net to tear.

NEVER use an aggressive cleaning agent such as petrol or turpentine to clean rubber roller.

This avoids the net fouling and wrapping around the rollers when feeding in.

The number of round bales possible from any roll of netwrap is dependent on at least three things:

The following table shows the approximate net use on varying sized bales in different crops.
These figures are given as guide and should only be used as an aid to operator usage when baling.

Many modern balers are equipped with a crop pre-cutting device which, when used in silage, can produce bales containing up to 20% more forage than a ’standard’ bale. This significantly increases the bale weight and density, and requires a corresponding increase in the amount of net that is used to hold the bale securely. Consequently, it is recommended that at least an extra 0.5 turns of net is applied to chopped silage bales. Likewise, when baling high density straw, it may also be necessary to increase the number of turns by at least 0.5 per bale to ensure it remains securely wrapped.

With effluent control legislation introduced in the mid 90’s, many farmers switched to silage bales as a means to store their valuable winter forage, as an alternative to expensive improvements required to older clamps.

When looking for a good silage wrap, the following points must be taken into consideration:

CO-EXTRUDED FILM
Mechanical Properties to ensure trouble-free operation in many vital stages of film application and bale handling.
The highest performance can be best achieved from a co-extruded film, allowing the various properties of the film’s ingredients to operate at their most efficient.

TEAR RESISTANCE
The film must have good tear resistance – to reduce breakages at the start of the bale wrapping cycle.

CLING
The film must have a good cling to provide an airtight seal when wrapping. This is essential to ensure all layers bond together and give the protection
needed to produce and maintain the valuable forage crop. A ‘sticky’ feeling film does not always mean the long-term tack level is good; likewise, if a film is noisy,
it does not necessarily suggest a better cling. Films which are very ‘sticky’ to touch are at risk from leaving tack deposits on pre-stretch rollers, leading to later problems.

PUNCTURE RESISTANCE
The film must have a high puncture resistance to withstand the forces of ejection from the turntable onto sharp crop stubble, as well as bale handling and stacking afterwards.

OPACITY
A consistent and uniform Opacity is essential for high quality silage production. When the film is stretched, the film colour must disperse evenly,
without visible ‘windows’ being produced in the film. Such problems could indicate not only a reduced film colour but also a reduction in the vital elements of UV protection
and cling where the film has ‘windowed’. If your film gives a very consistent Black dispersion, with no signs of windowing, it has good opacity.

U.V.
A high and consistent UV Stabilizer in the film is essential, as harmful ultra-violet radiation from the sun will degrade the quality of the film, eventually causing plastic to ‘break down’.

QUALITY I/D
Roll Identification and Quality Assurance. All good film manufacturers identify each roll with a unique i/d number, to provide absolute product traceability after production.
Such production standards not only offer product identification but also a guarantee of quality control and assurance that all products will be to the manufacturer’s consistent standard.

UNIFORM AND WELL SHAPED BALES
Important to ensure correct and efficient wrapping. This is of particular importance when wrapping net wrapped bales, as poor bale coverage by the net, resulting in ‘shoulders’ on the bale, will allow air to become trapped within the area between the ’shoulders’ – leading to spoilage and crop loss.

WRAP WITHIN 2 HOURS OF BALING
Extended wilt times will encourage the formation of fungi and will also reduce the nutrients in the crop.

WRAP CORRECTLY
Always ensure correct film application, ideally a MINIMUM of 6 layers (essential on Haylage crop), with a MINIMUM 50% overlap. To guarantee correct film application and overlap, film stretch must be controlled to the correct maximum of 70%, as an increase in film stretch causes excessive film ‘neck-down’ leading to reduced film overlap. This can be avoided by always maintaining the pre-stretch rollers  clean and free from tack build-up, and maintaining correct turntable speeds, particularly when wrapping in higher ambient temperatures.

SIZE AND MISSHAPEN BALES
Remember – where a bale diameter exceeds 1.2m, the wrapper cannot provide a minimum 50% overlap without increasing the number of revolutions of the bale. This will also apply when wrapping mis-shapen bales.

Silage crop losses will occur if poor or incorrect procedures are used. The following guidelines
may help to pinpoint any potential problems:

The use of a net, which can guarantee full width bale coverage, will avoid this.

Damaged film used during wrapping, causing it to tear when stretched

The diagram below ilustrates this: 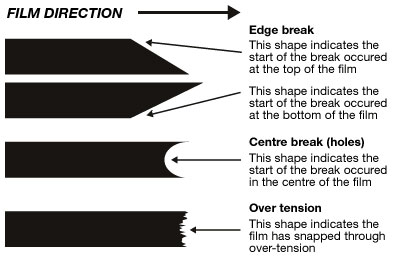 Guide to Stretchwrap usage based upon 4’ Round Bale Silage / Haylage

Guide to Stretchwrap usage based upon Mini Bales Silage / Haylage

How to calculate film usage
The number of bales that can be wrapped from a single roll of stretchfilm can be accurately calculated,
provided the following points are adhered to:

If all the parameters are correct (bale size, film stretch of 70% and correct number of bale revolutions),
then the following figures will always be achieved.

Any variation to the above parameters will cause numbers to differ.

Given a standard bale size of 1.2m x 1.2m, applying film at 70% stretch using the correct number of turns for
the film width used (24 turns for 500mm and 16 turns for 750mm for 4 layers of film), the calculations are as follows:

A – BALE CIRCUMFERENCE (sum length of all four sides of the bale).
B – TURNS OF THE BALE.
C – FILM LENGTH AFTER STRETCH (film roll length plus 70%).

Multiply A x B and divide into C

Twine Questions
Click on a question
Which Baler Twine?

What to look for when buying your baler twine?

b. Easy Feed
On some makes of twine the spool centre can often collapse and cause difficulty when attempting to draw the first few hundred metres from the spool. Choosing a twine with a larger diameter centre that allows the twine to flow freely from the beginning will eliminate problems.

c. Kinked Twine
A consistent and smooth shape to the twine will eliminate potential ‘hang-ups’ in its path through the baler and knotter mechanism, reducing costly downtime when baling.

d. Fibrillation
When buying Big Bale twines, ensure the twine has a high fibrillation. This guarantees a uniform and consistent twist and will give a higher performance through the knotting mechanism. A highly fibrillated twine will give optimum knot strength and also help avoid knot slippage.

Very careful attention should be paid to the bale pressure, depending upon the type and condition of crop being baled. During periods of extended dry and hot weather, for instance, straw bales may be noticeably lighter than during normal conditions, with the baler set to the same bale pressure setting.

In these circumstances, a decrease in pressure setting will overcome this; or, alternatively, a move to the next heavier twine is recommended.