The system of living and working together was at the heart of long-term Jewish goal of creating their own state. There are now 269 kibbutzim (the plural for kibbutz, which is Hebrew for gathering) in Israel , in which just under 2% of the 7.8 million population live. However, only around 30 kibbutzim continue in the classic model. The majority are moving to varying degrees of privatization, with property once owned completely by the kibbutz, being divided among the members.

The Mishmar Ha’emek kibbutz, which remains in the classic model, started back in 1922 when young Jews from Europe formed a work group in what was then Palestine. In 1927 they bought land off absentee Arab landowners and went about draining the valleys to make them suitable for agriculture.  Today the kibbutz has population of 1,200, of which 500 are voting members. None of the original founders are alive, but the heritage and sense of purpose definitely continues.

In the classic model, all property is owned centrally and everyone works for the good of the kibbutz. People don’t get salary for their work and in more recent times when people work outside the kibbutz their salaries go to the central  fund. Out of this, all the members basic needs are met. This includes education, housing, food and health. The kibbutz puts huge emphasis on education. Elderly members are looked after in specially built nursing homes and medical centers. Kibbutz members don’t own private cars, but a car pool system with 100 cars is maintained and people can book when they want to use them.

In earlier times all the children used to live in a children’s house and only return to their parents’ house for a few hours each evening. Since the mid 1990s this changed, mainly due to safety concerns. Children now sleep in their parent’s house, but from the age of four months until they are 18 years old they spent most of the time in the care of trained teachers. At 18 years old everyone must carry out military service, with women doing two years and men doing three years. After this they normally travel and then they have the option going to university which is paid for by the kibbutz.

The kibbutz is ran as a democracy where each member has a vote and committees and weekly meetings are held, but nowadays people have the option of watching on their television and even voting online. Each family gets an allocation of money every year depending on the number of people in the family. This can be used to travel or purchase what they want. How much they get depends on how well the kibbutz is doing. While most kibbutzim started with focus on agriculture, the majority have developed additional businesses. The success of these businesses is a major element of how well the kibbutz is maintained and run.

The Rise of  Tama Group 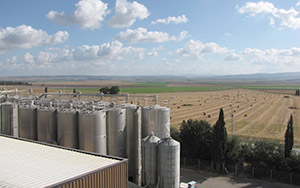 Kibbutz Mishmar Ha’Emek linked up with kibbutz Galed, another farming community to establish the Tama Group in 1950. Kibbutz members own it and many occupy key management positions and work in every department.

Tama has grown and developed into a modern, dynamic enterprise employing more than 1,100 people in Israel and around the world. They established a business in Ireland when they purchased an existing business of Gerry Johnston who now oversees their operation here. The company’s focus is on producing packaging and protective products for agriculture, in particular on netwrap for hay, silage and straw; an area where it has led the market for the last 20 years.

Dori Ivzori, managing director for Tama said: “We have focused on adding value to what could have become a commodity product netwrap, innovation and working closely with machinery manufacturers and users of the product.” This innovation led to the development of Edge to Edge™ Technology in 1998 that ensured complete bale coverage.

The company’s close links with agriculture allows it to continually test and develop new products. One focus has been on producing longer rolls of netwrap by increasing the strength of the plastic. This allows them to reduce the weight and the cost per bale wrapped. Initially they started at 3,000 meters but they have pushed this up in stages to hit 4,200 four years ago. “With a special mix of advanced raw material and a unique manufacturing Bale+™ Technology, we have just launched the 4,500 meter and already working on 5,000 meter roll” said Yair Arzi, netwrap product line manager. Another major breakthrough has been in the CoverEdge™ Technology which they developed exclusively with John Deere. This sees elasticized string pull the netwrap over the edge of bales.

The continued innovation has seen a rapid growth of more than 30% in 2011, as they push to keep up with demand. Turnover last year was €242 million and with the Tama Round Module of Cotton for cotton taking off, and a new outdoor storage solution for round hay bales being tested in North America next year, they have set their targets much higher. 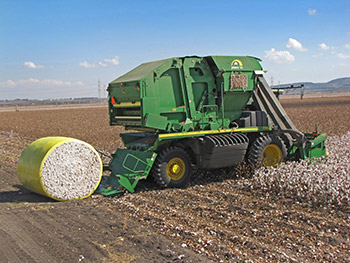 Farming 1,600 acres of crops
The Kibbutz also farm 1.600 acres of crops,of which 1.1% acres are irrigated. Rainfall at the kibbutz is normally around 600mm. but 700mm has fallen this season. Rainwater for irrigation is stored in lagoons and waste water is recycled as well. 4.5 people work in the crops and yield area (see below for crops and yields).

There are five John Deere tractors along with one Valtra. Seven round balers are used to mainly test and develop new products for the Tama plant, but they also carry out contract work in the area. They account for 50% of round balers in Israel, as most use large square bales. One of the most impressive machines is the newly developed John Deere 7760 | CP690 | CS690 cotton harvesters, a mammoth machine that picks, bales and wraps up to two tonnes of cotton at a time. Tama has worked closely with John Deere to develop the Round Module of Cotton for the machine; an invention that has fueled their growth in North America.

Managing livestock and poultry
SUCKLER HERD – As well as a dairy herd (which we will cover in full next week on the dairy pages) they have a 50% partnership in an 800 suckler cow herd that graze the 7,500 acres of hills and poorer land. They sell 500 to 600 cattle a year. Some of the calves are sold at six months, weighting around 250kg, and make approximately €1.000. The remainder goes to a feedlot where they are fed for an additional six months until they reach a weight of about 500-550kg per head. They are sold for €3-€€3.50 per kg, depending on demand, quality and breed of the calf. Most of the beef in Israel is imported, either as frozen beef or as calves coming from Australia and Europe.

POULTRY – They also run six poultry breeding farms producing boiler chicks and they have 100,000 layers and a hatchery which has an annual output of 16 million chicks, 10% of Israel requirements. It’s certainly big business, with each area having to make a profit for the Kibbutz.