Well, excellent cow and feed management obviously play a huge role in a sector that has quadrupled milk production since the beginning of the 1990s.
Efficiency. However long before then, in fact since 1919, an elaborate data transfer system from which detailed information about any single cow can be highlighted for analysis has been in operation, allowing continual improvement of practical herd management for increased efficiency . The special Israeli approach to dairy herd efficiency hasn’t only brought higher milk sales, it also produces quality management software now selling well worldwide. Helping continual improvement is the typical Israeli dairy farmer’s love of technology and innovation.

Those at the grass roots are prepared to try out novel approaches. For instance animal movement sensors were quickly adopted in this country for computer identification of cows in heat – just one example of the national ethos that spotlights any possible technological advance that might improve management and thus “efficiency”.

But first of all let’s take a brief look at the entire agricultural sector in a country where the population is growing at about 2% per year and looks to its farms to supply a large proportion of the necessary food under conditions of ever-scarcer land, water and available labour. Management skills mean production has exploded with output over the past two decades increasing by an annual 4%, while just 4% of the working population are now employed in agriculture compared with around 70% fifty years ago.

Kibbutz and moshav. This efficiency trend is clearly seen in Israeli milk production where there’s extremely close and effective cooperation between scientists, advisors, farmers and industry. It was in 1912 when the first dairy kibbutz was founded. Characteristic of farming in Israel are the kibbutz and moshav agricultural units. A kibbutz is a self-contained social and economic entity in which the members live and work together. Decisions are made by the general assembly of the members. Assets and resources are joint property. Today only 2% of the population lives in about 160 kibbutzim. The members work in the various sectors of the kibbutz economy. In the original form there is no private ownership and everybody receives life’s necessities from the kibbutz. Everybody gets the same income. This form of the kibbutz hardly exists any more as the socialist fundamental ideas find increasingly fewer followers in the communities. Modern kibbutz members receive wages from the cooperative for work performed. Not every member of the cooperative works internally, and conversely, people from outside work in the kibbutz. Besides cows, vegetables and fruit are grown and kibbutzim often run non-agricultural ventures such as machinery production.

A moshav is a settlement in which every family owns its own farmyard and house. Contrary to earlier days when products were collectively bought and sold in the moshav modern moshavim members value their economic independence. There are about 750 moshavim in which over 3 % of the total population live. Kibbutzim and moshavim are home for around 6% of the population and they form about 2 % of the working population of Israel. They produce around 85% of the state’s agricultural output.

The dairy cattle themselves are mainly HF bred for good resistance to endemic disease and top production under adverse climatic conditions including long hot summers. More breeding emphasis is put on health characteristics than purely on production. But this hasn’t stopped the dairy lines in this country evolving output that has topped the global milk leagues for years now. In 2010, for instance, average milk production was 11,667 kg (3.62% fat and 3.2% protein) per cow.

Milk with highest input costs. Feed production, imported fuels, high labour, machinery and technology costs means Israel is one of the most expensive dairy production locations in the world. At the same time there are regional differences. Extra cooling requirements and feed purchases mean profits from farms in the south of the country such as those around ‘Eilat’ are around 10% lower than in the north.

Dairy feed management is precise with feed centres processing and delivering TMR to surrounding farms. Reducing the amount of imported ingredients has priority. Around 50% of the concentrate rations are agro-industrial by-products from fruit and vegetable processing or the baking industry (pomegranate pulp, savoury snacks, etc.). Naturally, the high individual cow performance also reduces feed and labour costs as well as the carbon footprint of milk production. In Israel the CO2 equivalent for the production of 1 kg milk is 80% of that in western Europe and only 40% of the figure in New Zealand.

Milk production control. Since 1963 quotas imposed by the Israeli Dairy Board (IDB) control milk production in Israel. These are tied to the respective kibbutz or moshav and aimed at achieving consumer price stability as well as viable returns for dairies and farmers. Total production may only be sold to dairies under annual contracts. Monthly checks are carried out and farm deliveries above quota are immediately penalized. The IDB regulates quota amounts on a half-yearly basis so that demand is met as closely as possible. If a moshav stops production its quota may only be sold to another moshav, Increasing quota in a kibbutz is only possible when several kibbutzim merge. The division of the milk quota between the different types of farm is 57% for kibbutzim, 42 % to moshavim and 1% to agricultural colleges.

Under the extreme heat of summer, milk output per cow dips by 5 to 10% and the DBI offer summer milk incentives, last year of around 0.12€ extra per litre. Producer price is the result of government/processor negotiation. The official »recommended price« paid by processors to farmers reflects the average production costs from 15 % of randomly selected farms (kibbutz and moshav) and also includes compensation for management and capital costs. 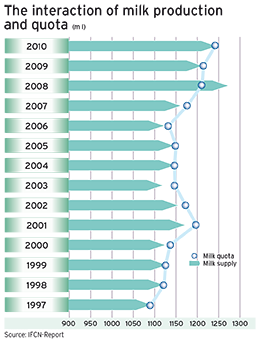 Milk price regulation. Current producer price is around 47.5 C/l. Full production costs per litre, just over 50% of which are feed costs, average 4oc. Maximum retail prices for dairy products are set by the government’s Department of Commerce and based on processing costs. Currently this is 1.38€ per litre drinking milk. The summer drop in milk supply is partly compensated for by winter milk being powdered for later use. Dairy processing is by three firms of which the largest (Tnuva) processes around 850 miilion litres per year into a variety of fresh products. Together with Strauss Dairy and Tara Dairy, Tnuva is represented in the Israeli Dairy Board (IDB).

Scarcity factor labour. In 2010 around 68,000 people were employed in agriculture and the trend in the last 20 years has been for more foreign labour in this sector, mainly from southeast Asia. Number and distribution of foreign farm workers is government controlled with 25,900 employed in 2008 and the aim is to reduce this by around 27% by 2015. The thinking here is that the proportion of the non-Jewish population should be reduced. As compensation, farms are subsidized with up to 40 ‘/0 of capital costs towards replacement of labour with technology. Minimum wage is equivalent to 4.25 €/h and the average wage in agriculture is around 1,120€/month with the average for other sectors around 1,600 €. The cost of living is high, nursery care alone costs 400 €/month per child.

Reducing environment pollution by dairy farms.
To protect diminishing resources of water and farmland and increase overall efficiency Israel introduced a milk reform in 3998. One aspect was encouragement of farm amalgamation. Another aim: more efficient milk production with lower prices.

Government cash made available for required modernization saw around 50% going for environmental protection measures (roofing Iive stock pens, manure separation, composting equipment, N-reduced feeds) and 30% for efficiency increases (AMS, spray systems instead of sprinkling for cooling, new irrigation systems in the fields). Up to 2006 the equivalent of around 190 m € flowed into this reform programme (l90,000 €/farm, 3,300 cow). Through this programme farm numbers have reduced from over 1,400 to 900, milk production per moshav increased from 389,000 I to 560,000 I per year and annual output per cow by over 1,000 l. Further improvements in cow comfort were also achieved. Most cows nowadays have individual housing space of 20 m2 and this is said to also positively influence milk output.

The cottage cheese protest. in the summer of 2011 rising prices of cottage cheese, a basic food of Israelis, led to a consumer boycott and protests against the general rising cost of living. Milk products tend to be expensive in Israel. An OECD study indicates Israel occupies third place after Japan and Norway for food expenditure. The price of natural yoghurt has risen by 46 in recent years and cottage cheese by 41 %. In line with recent population growth the milk quota has been gradually increased. But by summer 2011 it was decided that the market be opened for imports of milk powder and hard cheeses to help reduce domestic prices. Beginning in 2012 imports are to be approved for five year periods and the aim is to improve market transparency with mandatory disclosure of profit margin by milk producers and supermarkets.

Conclusion. The success of Israeli agriculture is closely tied to the pioneering spirit and innovative passion of the land’s farmers and to their readiness, together with scientists, to involve themselves and their businesses in research and development. Such a spirit has brought about the unique heat-tolerant Israeli HF cow and helped achieve efficient production from initially often arid or swampy land. Nowadays all farms record data on the production of individual cows, their feeding, breeding, health and the resultant economic analyses. Nevertheless, the Israelis consider that the genetic potential of the cow is not yet exhausted and that there is still more potential for improvement in management and utilization of data. The constantly growing population continues to force an increase in efficiency and improvement of land utilization.