Tama – netwrap for round bales / Public corporations and successful family business are not unusual. A village that leads a globally operating company is. AGRARTECHNIK could see how this works in Israel.

Like in a leaflet of a supermarket the lemons are shining and are pulling down the boughs of the trees. And even though the fruits are real, there is a smell of plastic in the air round the Kibbutz Mishmar Ha’Emek in Israel. Kibbutz is Hebrew and means something like community.

There are 269 Kibbuztim, plural of Kibbutz, in Israel. Less than 2% of the population lives there. Only few Kibbutzim are managed in the classical way. This intends that members of the Kibbutz own, manage and finance everything together. For this purpose they are bringing all their money. In return they are getting all they need and live a good life like this. You can imagine like a “flat share” only bigger with a whole village.

Mishmar Ha’Emek is one of the original Kibbutzim. Young people with pioneering spirit built it up in 1922 and started to dry the ground to use for agriculture. With the mechanization of the agriculture they needed fewer workers and they were looking for new scope of income. First machine for producing twine was built already in 1950.

Global company
Today Tama, which is the name of the company, is world market leader with net for round bales. The 1100 employees were generating revenue of 242 million Euro in 2011. The growth was about 30% last year. Special thing on this that still the 1000 members of the Kibbutz are the owners of the company. In these times they own 7 factories (3 in Israel and 4 in Europe). Distribution worldwide is made by 12 marketing companies. All members of the management are part of the Kibbutz community und therefore owners of Tama.

Living and working in a Kibbutz
There is a big bustle in the dining hall around noon time. Some women dish out the lunch- several dishes to choose from. They are cooking for everyone for every meal. Today everyone is throwing a voting paper in a specially placed box. That’s because everyone is deciding about new Kibbutz members. A weekly meeting is taking place for new projects and tasks in the Kibbutz and in Tama where also everybody has a voice.

People that cannot come to the dining hall, have the possibility to see it on TV. As the houses belong to the community as well, everybody gets a house that fits for the family. Does the family grow or do kids leave home, houses will be changed. Most of the Kibbutz-members also work in the Kibbutz. Alongside the company, there are lots of other responsibilities: The whole village takes its clothes to the dry-cleaner’s, there is a kindergarten, the green areas need to be watered and also staff are needed in the retirement home. In the Kibbutz every job is in great demand, as long as everyone gives one’s best; no matter if you are managing the factory or if you clean something.

Own Trial-Farm
Even though ventilators the size of a plane propeller of a plane are turning whole time, the air is muggy. Air is only cooling down a bit by the sprinklers. The “feed pusher” does not mind the 40° C. The 250 milk cows suffer more the temperature in summer (May – October) in Israel. Anyhow Doron Shalem, herd manager and also member of the Kibbutz is satisfied when checking the performance figures on the  computer. “We have a performance of 12.000 l (note of editorial staff: in Germany approx. 7.000 l a year) per cow per year. Milking is done by 4 Lely – robots.

Feeding of the cows is done by a contractor. “We are choosing quantity and mixture out of 17 components. He brings the food and provides it”, tells Doro Shalem. Apart from the cattle the Kibbutz is farming 640 ha cropland (see table). The combination of factory and own agriculture simplifies net tests in practice. Therefore 8 round balers and enough area are available. Tama benefits again from being in a community. Heads of the farm, netwrap developers and sales people are part of the Kibbutz, see each other several times a day and can directly talk about ideas and problems.

Out of stretch film, net is made

“This is the biggest Tama factory”, Yair Arzi (product line manager) tells while sticking ear protectors in his ears and opening the door. In the new halls 200 employees are working in three shifts. Only 2 or 3 days in the year production is closed, the rest of the year machines are running day and night. “The beginning of the production of netwrap is producing thin film”, Yair Arzi says. Like a chewing gum bubble the film is blown up, so that a balloon is arising. This is put together and cut at both ends. This film is wrapped on rolls by machines. Next step is that another machine is cutting the film in thin threads. “The tricky thing is to cut very thin threads to save weight. Anyhow they have to stand lots of pressure”, explains Yair Arzi. These threads are directly feeding into the weaving loom. Every single machine is producing 4 rolls at the same time. For this the Franzes, which are running on the bale, are fed lengthwise on the machine.

Schussthreads are connecting these. Needles are catching the whole thing and are producing a web. “Conventional netwrap is losing width when tensioning” tells the product manager. Tama has a patent on zig-zag- Schusses. “When our net is spreading in the baler, is does not break” For guaranteeing quality every single thread is electronically monitored. “In the process of netwrap production from raw material to end product approximately 10% recycling material accrues” said Yair Arzi, 98 % of these are reusable. This fits to Tama’s concepts not to produce that much garbage. “It depends on how much relative strength is available per meter netwrap.” Like this an increase of length is possible and the farmer has less waste.

More length
A special race is taking place between Mr. Standard and Mr. Marathon. Both are starting their tractors with round balers and trying to pick up as much crop as possible. While Mr. Marathon is nearly at the goal, Mr. Standard has to install a new roll again. To what extent the Tama comic can be transferred to practice is an open question. It is clear in any case, that this Israeli company sees themselves one step in front of the competition. After selling a 4200m netwrap, Tama introduces in 2012 netwrap with 4500m length.

This year special dealers got it for testing. In 2013 the net should be sold area-wide. “The farmer doesn’t want to change the rolls, he wants to drive”, tells Aviv Linn, Commercial Director of Tama. “The weight per meter needs to be reduced. Therefore we are studying new material”. If you have heavy net rolls, it is important to be able to handle them when feeding into the baler. Also in this range, Tama will launch something new. 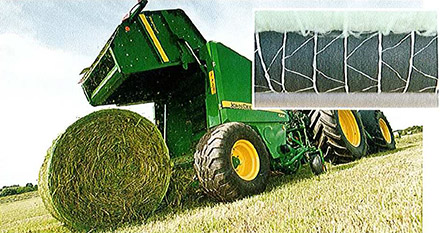 There are approx. 20-30 producers of netwrap. At first glance this doesn’t sound much, when you think that nearly every producer of balers has its own netwrap. But, it is often Tama who is producing the netwrap for the leading agricultural companies in their name. The cooperation with the producers is running well, so that mostly modifications are very simple. The netwrap is aligned to special machines then. “By using the correct netwrap, 95% of the problems are coming from wrong settings at the baler”, says Aviv Linn.

“The farmers buy expensive machines, but often don’t know the correct settings. Special training is very important” Tama is world market leader with round bale net and according to their indication 5 to 6 times bigger than the 2nd leading competitor.
As well there are subsidiary companies like Novatex. The most important business market is the USA. Especially for hay and straw the John Deere Cover-Edge-System is very popular, because also the shoulders are covered.

Special round bale net
There are also other ranges of application for the Tamanet. Turf can also be sown on this netwrap. Another possible application is Shade Nets for animals and plants. Advantage of netwrap compared to stretch film is that the product can sweat. For keeping food fresh there is TamaHome. Under this name Tama is producing plastic boxes for the household. New is film for cotton. The self-driving harvesters from John Deere are plucking cotton and are forming it to a bale. The specially developed film contains a bar code label on every bale, so that an allocation of the harvested cotton is possible by GPS. The shoulders are not covered, so that the air can circulate.
Also for this development Tama’s own agriculture was a great benefit because the Kibbutz grows its own cotton on 250 ha.