Many innovations in agriculture may take time to become established, some try their best and still don’t find acceptance, others… Read more

Many innovations in agriculture may take time to become established, some try their best and still don’t find acceptance, others gather interest but may fail to bring a revolution. So seems the idea of film to bind round bales instead of netwrap, an idea first being tried back in the early 1990s.

This system was never straightforward, though design changes to the application systems on some makes of baler have made this easier. It may be assumed that replacing net with a wide film would seem to offer an advantage, giving more film coverage to the bale, but in reality this is not necessarily the case.

The baler’s mechanism for film binding, gathers the wide film together into the centre before feeding a ‘rope’ of film between the rollers. This needs 3.5 wraps of the bale circumference per cycle, compared with only 2 for netwrap and it might be assumed that by using film to bind the bale instead of netwrap can help to reduce the amount of film needed in wrapping, from 6 layers to 4, but this is not the case. The normal system for bale wrapping has a complex over-lapping pattern, 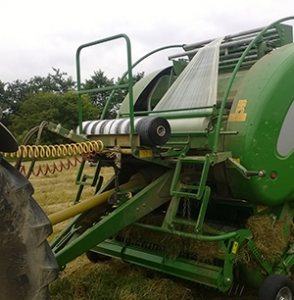 which cannot avoid certain parts of the bale not being covered as well as other parts. These show as distinct small tri-angle shape areas on the bale sides, near the edge, and even with a 6 layer film application, these areas will still only receive 4 film layers. Binding film is un-able to spread far enough down the sides of the bale to cover these parts, making it impossible for it to offer sufficient protection to the bale equivalent to reducing the wrapping film from 6 layers to 4. By understanding this, it is obvious that wrapping with 6 layers film is still the recommended method for the best forage protection.

With combi-wrap system easily able to maintain the integrity of a bale with only 2 wraps of net, a roll of 4,500 could easily produce over 500 bales per roll, giving an average cost per bale of only 0.37€. This contrasts with binding film, only able to make 150 bales per roll the average cost per bale for the binding by film option is 1.00€. Added to this must be the extra capital cost of the machine, which on average can be 7,000€ more than a ‘standard’ baler of the same make. Given that each baler could be expected to make 10,000 bales a year, for its initial life of 3-years, on average, would mean a further 0.23€ must be added to the bale cost to use binding film. Finally, added to this would be the wrapping cost, which as described, would be the same for both options, 6-layer wrapping film of each bale.

In a typical 10 hour working period, 500 bales can be produced and wrapped. A single roll of 4,500m netwrap is capable of over 500 bales, so will not require changing, unlike binding film, which, at only 2,000m per roll, will only make 150 bales per roll. This would require 2 further roll changes for the same 500 bale working day. Furthermore, as baling cannot continue until the binding process has completed,the film binding choice increases the baler’s stationary time for each bale, so reducing baler output considerably, making the choice of using binding film a much slower operation compared with netwrap. 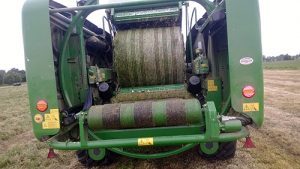 With a seasonal bale count of 10,000 bales, 59 rolls of binding film would be needed, compared with only 18 rolls of 4,500m netwrap. Quite apart from the massive logistic effort to handle this many rolls, especially considering the baler can only carry two rolls of any binding material (netwrap or film, one in use and one spare), using binding film would need multiple re-loads during the day, having a direct impact on productivity.

In summer 2015, an extensive practical and scientific research study was conducted throughout 2015 by TEAGASC, the Animal & Grassland Research and Innovation Centre in, Co. Meath, Ireland, in which numerous combinations of netwrap or binding film were compared to establish real comparisons in chemical composition, mould and sealing. 70 silage bales were made, using combinations of 2 wraps, 3 wraps and 4 wraps of netwrap, or 3.5 wraps of binding film were then wrapped in either 4 or 6 layers of wrapping film.
Teagasc’s Dr. Padraig O’Ki 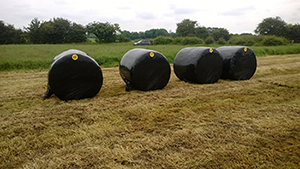 The chemical composition results showed that the quality of fermentation was the same for the netwrap bales and for those made with binding film, for the same number of wrapping film layers:

It is not surprising that the results of netwrap and film replacing net were similar: Sealing efficiency rate which was measured by the duration (seconds) for an induced vacuum within a bale to decline, was also similar (see table below) meaning that all bales had the same conditions for fermentation no matter under what wrap- either netwrap or binding film.

Suggestion that using binding film will increase bale density and achieve an increase in forage quality is also slightly mis-leading. A previous study by Teagasc ‘Improved Technologies For Baled Silage’, published by Teagasc in December 2002, compared bales of low, medium and high Dry Matter content, baled at high and low density settings with bale weights ranging from 427kg up to 708kg. The study concluded there was little difference in forage quality related to bale density, Mr O’Kiely commented on this, saying “whatever amount of extra oxygen that may be present in a low density bale would soon be consumed in the normal fermentation process.”

Practical use has shown that the two different binding/wrapping systems offer little difference in forage quality and certain on-costs in using binding film cannot be ignored. Practical disadvantages also remain for contractors who may have a customer base where some prefer one method over the other, meaning logistic and operating difficulties during the working day to carry enough material for both.

It’s a choice thing, but does a ‘fashion’ trump cost savings ..?