For better or worse, I’ve been in the crop baling industry for almost 40 years. Yes, involved with twine my entire adult life, what an admission ! However, in all of this time I have worked for manufacturers of the product, so have a good knowledge of what is what, unlike many folks who try to sell the stuff, judging by the stories I hear. Read more 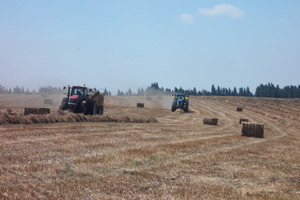 it was always accepted that to make baler twine stronger, you simply made it thicker; the same recipe, just more of it. Well, this is one way to do it, and it is the way that most producers continue to do so, however, sooner or later this simplistic approach to ‘advancing technology’ will catch people out. Nowadays, with the never-ending development of Large Square Balers (LSB), demanding more strength from the twine, we have reached that point we could call ‘natural selection’ for the world of baler twine producers, where those who do not evolve and develop will simply fall away and cease to be a factor in the business. We have seen this already in Europe, particularly in the UK and France, where once mighty twine producers are now running behind or, in some cases, no longer exist. 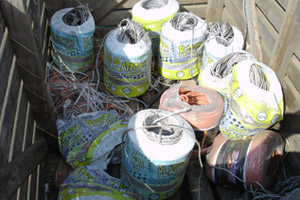 You see, whilst making a twine thicker will, un-deniably, make it stronger, it also introduces many other factors to complicate the situation. Thicker twine means the knotters may not be able to work as easily as with slightly thinner material; in some cases the twine may be so thick that the knotter cannot handle it at all, possibly damaging the mechanism. The characteristics of the twine will also be affected, making it less easy to tie a tight knot, think of trying to tie a knot with thick rope compared to string.

Most modern LSBs have a ‘double-knot’ mechanism, so the action of the knotters in tying-off the last bale also create the knot holding the twine around the start of the following bale. This is a very successful method, as it prevents the twine being held under the immense pressure a ‘single-knot’ system creates, which can damage the twine.

The problem in introducing a twine that is thicker, to achieve greater strength, into a ‘double-knot’ LSB is that the knot at the start of the new bale needs to hold together for quite some time, as the bale is being formed – by the packer arm on the ram pushing crop into the baler. This stuffing action has the effect of tensioning and relaxing the knot as the bale is formed, so that unless this knot was well formed, with a twine ‘supple’ enough to form a well tied knot, it can easily un-tie itself in the time it has taken to make the bale. This has the effect of the knot simply pulling-through once the full pressure comes on the twine when the bale is finally tied-off.

There are now two major baler OEMs that have very specific high-density double-knot LSBs, (Krone and AGCO), which require a specifically strong, yet ‘supple’ twine to be able to operate to their maximum pressure, fully capable of producing bales of more than 200kg/m3 (the Claas Quadrant 3400 is a similar high density baler but uses a single-knot system). There are dozens of twine manufacturers, all of them claiming to have a twine for every application, yet only two producers in the whole of Europe, one of which is Tama, have twines suitable for this new generation of double-knot balers and, more importantly, these producers are the ONLY ones with products that are specifically cleared to be used on these new machines.

Perhaps Darwin was correct in his theory of natural selection !

Your Feedback
Click here to cancel reply.
2 Feedbacks: »
Who am I...