Does anyone ever wonder, or even cast a thought, about making a good job well done…right to the very end? I speak of silage bale wrapping, where, in my experience, all too often a quality job is put at risk because of a lack of fore-thought or after care in the long and expensive process of making valuable winter fodder. Read more

Alright, I am not finger pointing at everyone in this business, but it does seem, quite often, that the responsibility for wrapping bales is given to those who, perhaps, have less experience or lack of awareness of how easily a good job, if not done correctly, can turn out bad. It may be summer-time hired help, a student or maybe a spouse, even the farmer or contract business owner has been known to ‘fall at the last hurdle’.

Apart from the obvious considerations of handling a wrapped bale, where any film puncture will compromise the valuable forage with air ingress to spoil the fermenting grass, I want to draw people’s attention to an easily over-looked, frequently mis-understood, yet easily avoidable situation…of insufficient film layers on parts of the bale.  This huge risk is so very easily missed by using black film.

Unlike our friends in Europe, who prefer white or light green, which allows an easy recognition of the over-lay of the film as a result of the lighter colours’ relative transparency, those still intent on using black film are blind to the accuracy of film application to the bale.  After all, once the bale is covered in one layer of black film, how can you possibly tell how much film is on it and how accurate the over-lap pattern of each successive film application actually is? You can not!

Look at the pictures below, to give a quick understanding of what I am talking about.  All the bales were made from the same baler and wrapped with the same turntable wrapper, with no alteration of settings.  The black bales look to be well wrapped….as they would when you cannot see the accuracy of the over-lap. The corresponding bales wrapped in light green easily show areas of the bale which have suffered from poor film over-lap, the darker areas, where the crop is more visible through the few film layers in this place, rendering a ‘thinner skin’ of film on the bale in these places.

This is most likely a result of one too few rotations of the bale when wrapping, by mis-calculating the correct number of bale rotations required in the first instance.

To ensure the bale is fully covered, it is best practice to count how many turns of the bale are needed to fully cover it with film, so no crop shows anywhere; then ADD one more turn. This now ensures that the entire bale is covered with 2 layers of film (each film application over-lapping the previous by at least 50% of its width as it is applied). On a 1.2m diameter bale this is usually 7 turns to cover the crop and ADD one = 8 turns for 2 layers coverage. To achieve coverage of 4 layers this number is doubled, so 16 turns = 4 layers coverage and for 6 layer coverage it is multiplied by 3, so 24 turns of the bale = 6 layer film cover. These numbers relate to a single roll turntable wrapper and the principle also applies to twin-roll satellite machines, where four revolutions of each satellite equate to 8 turns of the bale on the single roll machine.

However, one must be mindful that, with two rolls, there are two tails of film that, after being pulled together to be cut, are not at full width for half a bale turn at the start of the following bale wrap cycle and, at the end two tails that want to un-wind from a bale… so even greater reason to check things before diving headlong into 30 acres of silage bale wrapping!

The outcome of such a simple error can be hugely wasteful and expensive if, when opening bales for winter-feeding, the areas with less protection have suffered from serious spoilage…which is a very real risk.

There is a very simple way to check for sure that this is not happening, which involves a bit of mucking around but will allow you to rest assured all is well. 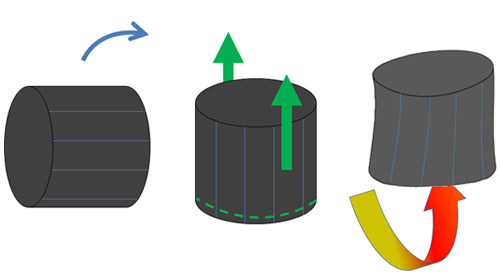 When wrapping, take the second or third wrapped bale (not the first as film application is never fully accurate for the first bale) and, after it is ejected from the wrapper, turn it on its end and cut around the base of the bale and lift the film ‘skin’ off.  Then, simply climb inside the bale skin (which will be clean as it is a newly wrapped bale) and, after pulling the edges down to eliminate the daylight, it becomes very easy to see any parts of the bale that do not have enough film coverage…as the picture below clearly shows… 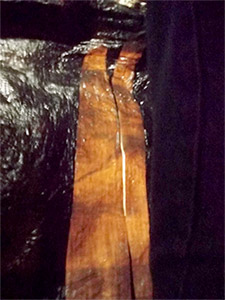